A fairly known Nigerian graphics designer, Ayo The Creator, has revealed how he was unjustly detained by officers of the Special Anti-Robbery Squad while traveling to Lagos, though the Benin Expressway.

Ayo mentioned that he had embarked on the journey with his brother and when they were stopped on the road, the officers began to question the reason he had many images on his phone.

Seeing that they had begun to assume he was a fraudster, the young man began to raise his voice, iterating that he was not a “yahoo boy”. And since the officers could not contain his acts, he was cuffed alongside his brother and pushed into their van.

Ayo explained that they were subsequently allowed to go to their destinations after he described how the pictures came to be via his Instagram account.

See his narration of the incidence below. 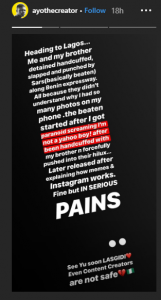 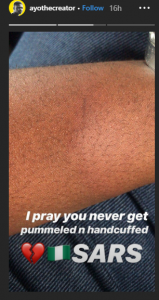 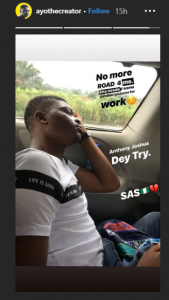