Rockstar Games has launched a travelogue for the eagerly-anticipated fifth instalment of Grand Theft Auto, released on 17 September. Don’t be fooled by the characters front and centre – in GTA the city is always the star. This time around Los Angeles and Southern California are seen through the looking glass of Los Santos & Blaine County. It’s a world of failed dreams, squalid politics and oh so many criminal enterprises that need exploring – so let’s take a look at what to hit first. 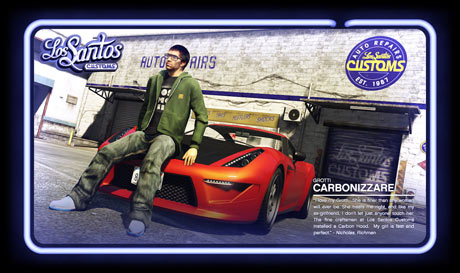 Goodbye respray and hello refit! LS Customs lets players pimp out their virtual rides with new wheels, body parts and of course paint jobs. Mounting a pavement full of pedestrians has never look quite so stylish, and the desire to get your money’s worth from that shiny new bull bar means you’re more focused than ever!

GTA 5: The names are so good that the logo design often doesn’t get as much credit as it should. Would you get a haircut from this man? Photograph: Rockstar Games

There’s nothing more gangsta than high-class grooming, and that little accented ‘ê’ gives it away – step forward GTA’s version of Josê Eber, hairstylist to the stars, a man who will charge you thousands of dollars for a few minutes with his scissors. Do not miss the travelogue’s many customer testimonials, which are GTA at its finest: “There are animals in nature that will increase their size to scare predators. I do the same with my hair. I will drop a fool in a second.” 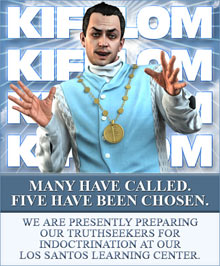 GTA 5: The website for the Epsilon Program is brilliant, one of its best features being the multiple donation options. Photograph: Rockstar Games

This language echoes perfectly Scientology and its Life Improvement Centres, but of course The Los Santos Learning Centre is not at all about fleecing the credulous. Just kidding! GTA 5’s resident wingnuts promote the Epsilom Program, a life-altering religious experience that puts you at ease and requires a bare minimum of thought. Rockstar North’s most scathing satire is always on the largest targets, and one can only pray those Scientologists notice and tries to sue – we’d soon find out the price of peace of mind. 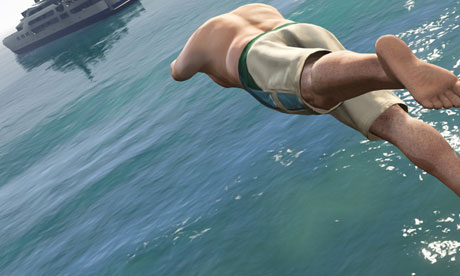 GTA 5: Scuba diving is definitely on the cards, but I won’t be happy until I can nuke Bob Mulêt’s Hair & Beauty Salon from beneath the waves. Photograph: Rockstar Games

The waters around Los Santos host all kinds of flotsam and jetsam, but it’s the promise of “submersible equipment” and shipwrecks that really get me wet. One can only hope there’s a jack-able nuclear deterrent lurking somewhere in the deep. 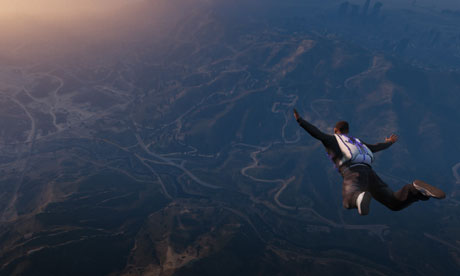 GTA 5: How can you tell that Rockstar North, the genius studio behind Grand Theft Auto, is Scottish? GTA 5’s stock market gives the game away: BAWSAQ. Photograph: Rockstar Games

Grand Theft Auto: San Andreas had a particularly special quality – you could get in a car, stick the radio on, and just drive on dirt roads for ages. Rockstar North has never really done that since, but the world of GTA 5 is, we are told, larger than San Andreas, GTA 4’s Liberty City and Red Dead Redemption combined. I’ve put this at 5 because it’s not really a destination proper – but the first thing I’ll do with GTA 5 is get in a car and drive nowhere in particular for hours. It takes a very special game to make you look forward to that.