Chelsea wing forward, Eden Hazard has reportedly sealed the deal to move to the Spanish side, Real Madrid, after his club agreed to receive a sum of £115million in exchange.

Reports also revealed that the Belgian would earn a whopping £400,000 as his wages on a weekly basis.

For many seasons, Hazard has been on Real Madrid’s radar but his commitment to Chelsea has made their efforts futile.

However, as the skillful playmaker seeks to find another challenge elsewhere, it was expected that Spain would be his new home. 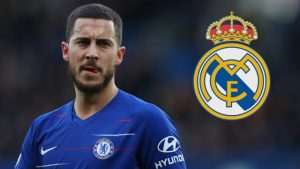 While revealing the club’s plans to Sun, Madrid’s president, Florentino Perez, said, “We are working on a project to make people dream again, where we recover our hunger and ambition. I have already lived through this stage before.

“I have a dream that Hazard will arrive this year. Let’s make a good team this year.

“I am very interested in him coming to Real Madrid and I am very hopeful that he will come this year. He’s one of the great footballers.

“Last year we wanted him, but this year he only has one year left on his contract and it is easier.’

Real Madrid is expected to pay an advance fee of £100 million while some other add-ons would make the overall deal sum up to £115million.