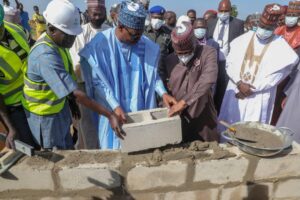 The Minister of Health, Dr Osagie Ehanire, on Thursday, laid the foundation of the Teaching Hospital of Borno State School of Health Sciences at Njimtilo, near the university’s campus on Maiduguri-Damaturu road.

Ehanire, who was in Maiduguri for the inauguration of some landmark projects at University of Maiduguri Teaching Hospital (UMTH), was invited by Gov. Babagana  Zulum of Borno to lay foundation of the building.

In his address, Zulum said “in fulfillment of the criteria for the establishment of medical colleges, we are here to witness the foundation laying ceremony for the two important projects.

“We want to start medical courses, especially medicine, in the State University so that we can produce healthcare providers and undertake research, as well as cater for the health needs of citizens.

“We know that there is increasing population in Maiduguri and we have only one teaching hospital, and Maiduguri has a population of over three million people.’’

According to him, a new teaching hospital will serve the increasing population, which is in line with the state’s development plan.

Zulum added that “just five days ago, we launched our 25-year development plan, and the State University Teaching Hospital and the College of Medical Sciences are part of the plan.”

Prof. Othman Kyari, the Chairman of a high powered committee for the establishment of the Borno State University Teaching Hospital/Medical College, said that the launch of the projects was the first phase.

“The requirements of all the regulatory bodies (medicine and surgery, dentistry, radiology pharmacy, etc) were put into consideration.

“We believe that by the time this complex is completed, it will probably be one of the best in the country.”

The project is being carried out through the Ministry for Higher Education, Science, Technology and Innovation, whose commissioner, Dr Babagana Malumbe, received Gov. Zulum and the Health Minister on arrival at the groundbreaking ceremony.

The state’s Ministry of Health and relevant government establishments are expected to play vital roles as the project passes through developmental stages.