As security crisis lingers in Nigeria, some armed men suspected to be herdsmen have stormed an Orphanage in Delta state and fatally destroyed its facilities.

The Great Saints Orphanage, situated at Issele Uku area of Aniocha North Local Government in Delta state, has housed many underprivileged Nigerians since its inception.

The attack rendered the vehicles parked in the building damaged.

Narrating the shocking experience to newsmen, Mr. Emeka Ezeagbor, the founder of the orphanage lamented the inhuman nature of the attackers, especially because the building was built for humanitarian projects. 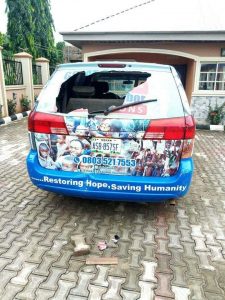 The Police spokesperson in the State, Onome Onovwakpoyeya, has since confirmed the incident. In his statement, he said, “Yes, we got the information about the incident and we are trying to get the details from the DPO of Issele-Uku.

“Even though I have got it, I can’t reveal the details until I get approval from my CP.”

As of press time, the PPRO failed to reach out to our correspondent for details of the attack.

Further explanation about the incident has not been provided yet. However, the herdsmen were said to have held a party at a location not too far from the orphanage home. The after the merry, a fight broke out between them.

UAE under fire for detaining activists beyond jail terms