Dina Asher-Smith is definitely on the rise and she’s one for the future. Doha saw the British athlete took center stage when she won silver at the 100m, and then took the world by storm with gold in 200m, she topped that with another silver medal in 4x 100m relay where she ran anchor for Great Britain.

An ecstatic Asher-Smith revealed the British quartet for the final had not practiced the baton changes in the warm-up. 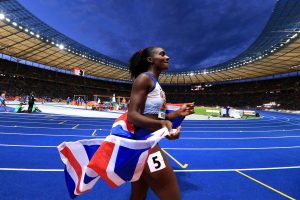 “I think we all handled the pressure between us which is testimony to how much experience we have got as a squad,” she told BBC Sport.

“It’s been a good champs but obviously it’s a team event.”

#SexForGrades: Buhari calls for action against sexual harassment of females