How Police Extorted N20k From Me For Holding Coke Bottle – Victim

A Delta state indigene resident in Osun, Mr Pius Perfect has accused some men of the Osun State Command of the Nigerian Police Force of extorting him simply because he held a plastic bottle of Coke.

In a report by The Punch, Perfect, a forex businessman, said he was on a business visit around the Government House Road on June 8 when three policemen accosted him.

He said that the men saw him on a motorcycle, stopped it and asked what he was doing holding a bottled coke.

He added that one of them collected the unopened bottle and threw it away before ordering him into a commercial vehicle they used for patrol.

Perfect said the policemen threatened to hit him with the butt of their gun if he did not comply with the order.

The 24-year-old said he had no choice but to enter the vehicle.

“Once I was in the bus, they told me to unlock my phone and they drove towards the outskirt of Osogbo and they picked other people along the way.

“They checked my phone and didn’t find anything incriminating, then one of them said if I don’t confess that I am an internet fraudster, I would be in trouble,” Perfect said.

He added that he was forced to transfer N20,000 to one of the policemen after they checked his account balance and saw that he had money in the account.

Perfect said that in the process of transferring money, he got the account details of one of the policemen, known as Oyebiyi Saidi and took his picture. 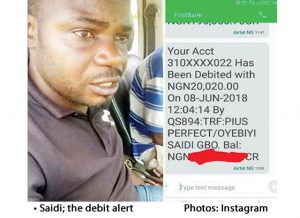 The Osun State Police Command has yet to respond to the allegation.

APC Chairmanship: Read What Oshiomhole Said About His Opponents

NDLEA Seizes 46.8 kg of Tramadol Capsules Worth N50m in Adamawa