Heavy wind and rain began battering late Wednesday as the British territory braces itself for Hurricane Nicole, which has been forecast to affect the Bermuda Islands Tomorrow.

The U.S. National Hurricane Centre in Miami said the storm is expected to pass near or over Bermuda on Thursday. It has been named a major Category 4 storm as it tracks it way toward the tiny island in the northern Atlantic Ocean. The Hurricane Centre urged islanders to rush hurricane preparations to completion.

While Bermuda has sturdy infrastructure and is accustomed to storms, government officials said are people to prepare for the hurricane and remain indoors on Wednesday and Thursday. 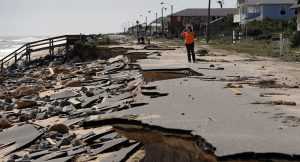 This is happening as the United States death toll rises to more than two dozen due to Hurricane Matthew. At least six people have died in Florida, and the authorities in Georgia and South Carolina reported three deaths in each state.

More than 650,000 customers remain without electricity, according to local utilities, with about half of those in North Carolina and Virginia.

Check Out These Lovely Photos Of Rihanna And Her Dad