President of The United States of America, Donald Trump, has weighed in on the current trial being faced by Michael Cohen, a lawyer who once worked with him.

Trump believes that the attempt to get him to confess in a bid to indict him is just another form of the harassments he has faced since he became the president of the country. And just like other previous cases, he has been wrongly accused, Cohen’s attempt to bring him down will not yield any results.

Trump said, “After more than two years of Presidential Harassment, the only things that have been proven is that Democrats and other broke the law. The hostile Cohen testimony, given by a liar to reduce his prison time, proved no Collusion’.

He continued, “his just written book manuscript showed what he said was a total lie, but Fake Media won’t show it. I am an innocent man being persecuted by some very bad, conflicted & corrupt people in a Witch Hunt that is illegal & should never have been allowed to start – And only because I won the Election”. 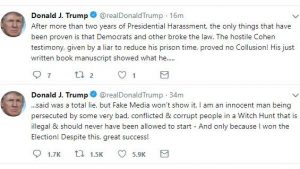 Also, read: How God saved me from death before my 77th birthday thanksgiving service – Pastor Adeboye

Election: PDP Lost From The Day I Stepped Out Of The Party – Akpabio

Stranger forces himself into woman’s car, attempts to rape her