I am not the one with your confused, expired destiny – Actress rips OAP Freeze to shreds

Daddy Freeze, leader of the Free the Sheeple movement took a major L today after he got into a verbal altercation with upcoming actress Juliet Ubah.

Daddy Freeze who is known for stirring controversy on social media, encountered the proverbial’s hornets nest when he carried the comments of the actress to social media and rubbished her claims and personality. 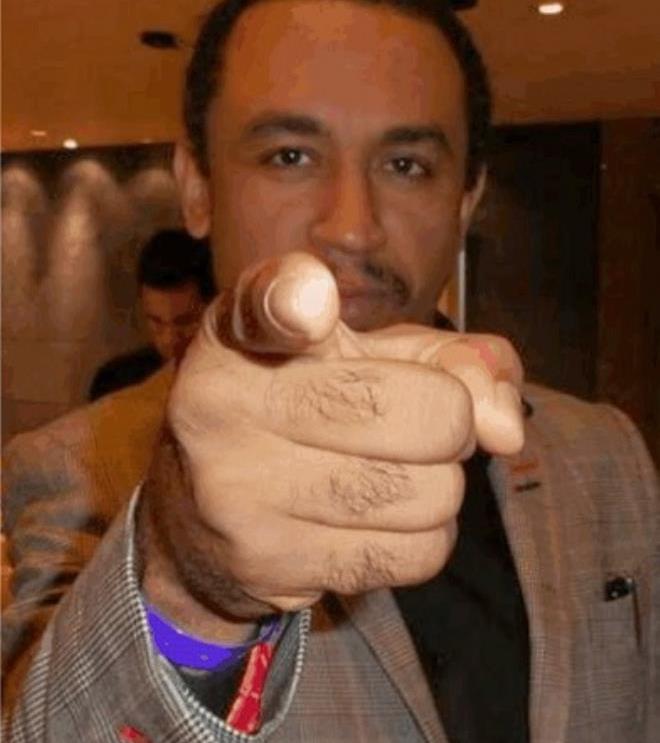 Juliet had come under attack from feminists after she claimed a woman needed to be married to be complete. Many pro-feminist thinkers took to social media commentary to blast her and accuse her of having a typical African mentality.

Freeze took it a step further and composed a message to debunk her opinion. Freeze posted: “Bescumbered statements like these, are the eminent bane inimical to the advancement of slavery, both mental and physical. It will be unlettered of us to adopt the assumption, leaning upon this statement, that Oprah Winfrey, Linda Ikeji and mother Teresa are incomplete, simply because of their marital status. I hereby implore all women, to undertake the task of standing firmly against statements like these, or bear the consequences of slavery! –
In another vein, is her attire and posture in this picture delineating the true values of the Igbo culture? I’ll suggest not! ~FRZ”

Bescumbered statements like these, are the eminent bane inimical to the advancement of slavery, both mental and physical. – It will be unlettered of us to adopt the assumption, leaning upon this statement, that Oprah Winfrey, Linda Ikeji and mother Teresa are incomplete, simply because of their marital status. – I hereby implore all women, to undertake the task of standing firmly against statements like these, or bear the consequences of slavery! – In another vein, is her attire and posture in this picture delineating the true values of the Igbo culture? I’ll suggest not! ~FRZ – #FreeTheSheeple

The actress did not pretend to take this one sitting now as she immediately blasted back. In a statement on her Instagram titled Open Letter to Daddy Freeze, she said, REGARDLESS OF HOW MUCH A WOMAN MAKES OR HER LEVEL OF SUCCESS, SHE IS INCOMPLETE WITHOUT A HUSBAND BUT THAT DOES NOT MEAN A WOMAN HAS TO RUSH INTO MARRIAGE BECAUSE OF THIS——actress Uba.
Daddy freeze not everyone will die complete , I’ve never been in support of abusive marriages, Any woman who finds herself in such circumstance should please follow the step of your ex wife because in this life we cannot have it all and it’s better to be alive and INCOMPLETE

Now coming to your own interview about your marriage, you said “ You gave me the worst union a man could ever have,the worst marital nightmare ever , yet I thank you for it because if I hadn’t tasted a bad union , I won’t ever BE ABLE TO APPRECIATE A WONDERFUL ONE , this statement above clearly shows how important you know marriage is to a COMPLETE life
No wonder you started dating Benedicta just 4 months after your wife packed out
Are u not dumb for using Mother Teresa, Oprah Winfrey and Linda Ikeji as ur defense tools? In case you don’t know —-Mother Theresa took an oath, to live a life of Celibacy , do u know what this means? She was READY to SACRIFICE , she knew it was a difficult thing to do but it was her decision. ——Oprah Winfrey was already a Billionaire but she still had partner, someone she was dating ,There was something missing that money couldn’t give her ——Linda Ikeja knows she is still not complete that’s why she at times jokingly talks about marriage or pulls stunts to remind our men that she’s still single
Did u ever make out time to read my interview thoroughly before coming out to pour your more than 40years old frustration and bitterness on my 25years old body?
I’m always very surprised how you lie to yourself but the shocker is how you feel so comfortable living with that
@instablog9ja @vanguardnews

You came to jump into women issue, let me ask you, Are you now my fellow lady?Bisexual? should I believe that those gay rumors about you are true….if so, hope you still remember what happened to Sodom and Gomorrah in the Bible?
If you argue with a fool, he will eventually drag you down to his level and beat you with years of experience that’s why the men of God just decided to ignore you on the issue of tithe ,so because you are gradually loosing your cheap popularity you decided to come and carry my matter on your head as if I’m the one with your confused and expired destiny .

Freeze, Your village witches have freezed your brain indeed that’s why you are now bipolar …..if not I see no reason why you dragged my tribe into your bitterness saying I didn’t dress like one, so I will always dress like an Igbo girl whenever I’m going for an interview ? or you don’t know how bloggers go to someone’s timeline to choose any picture they like when publishing a post about the person .

Because your marriage failed, You are now blaming Marriage itself? Misleading our ignorant youths , but I’m sure none of them will ever like to end up like you …living in past glory…I get am before no be property , so therefore, FREEZE YOU ARE INCOMPLETE!

With all your big big grammar, you can’t boast of even publishing a Nursery rhyme…what is actually your contribution to the society?
Can’t you see that you have lost your respect in the society , if a girl like me can openly insult you without fear or guilt?
I ll advice you like my younger brother now, because that’s where you have placed yourself, “this your mouth wey you dey always shook for mata wey no concern you ,make e no go bring ur end because of see finish or a case of mistaken identity….just an advice
Last but not the least
Aunty feminists una well done ooo
How much dey una account balance to start with ?
I hope u all are richer than Oprah Winfrey?
Majority of una never enter plane before and some fit no travel outside naija till dem die yet una say I get African mentality..it’s alright