As part of his campaign pitches, senator Dino Melaye has made some bold statements about his ability to scale through challenges and his confidence in governing Kogi State if elected as the governor.

The Peoples Democratic Party candidate made a courtesy visit to the NUJ press center on Wednesday and weighed in on his plans to rebuild the state, adding that the current administration was not practicing democracy.

Melaye further stated that starting from the moment he was given the opportunity to compete for the gubernatorial post, he has been nurturing the idea of contesting as the president of the nation soon. 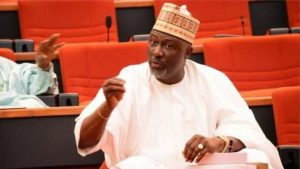 The senator said, “Kogi State is not witnessing democracy, what we are witnessing is the government of the greedy, by the greedy and for the greedy; best put as ‘greedocracy’.

“But when I come on board as governor, I shall build a new Kogi State where ideas will revolutionize the state.

“My administration will banish hunger from the state. Kogi has no business to be poor. I shall look into agriculture and technology to turn around the economic fortune of the state.”

“I have no father, uncle, in-law or godfathers to pilot my ambition, but I have the requisite requirements to face the APC candidate in the election.

“I fear no body, I only respect human beings. I have been arrested 18 times within the last three years and I have 12 cases in court, but I’m still standing. I have what it takes to face and rescue the state from Yahaya Bello.”