Barcelona captain, Lionel Messi has stated that he misses Cristiano Ronaldo in the Spanish League because he gave some form of prestige to the league when he was there.

Ronaldo departed Real Madrid at the end of last season, following rumors that he had some misunderstandings with the owners of the club.

He joined Serie A champions, Juventus, thereafter and has recently been on a remarkable form, especially in the Champions League. 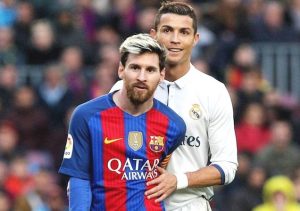 Ronaldo scored a hat-trick against former La Liga rivals, Atletico Madrid, in the round 16 stages of the competition and got on the lips of football fans around the world.

Although Messi and Ronaldo cannot meet in the competition unless they both get to the final stage, Messi explained that he misses the competition that Ronaldo stood as, back in Spain.

While discussing with the Argentine radio station, FM Club 947, the father of three stated, “I miss Cristiano. Although it was a bit difficult to see him win trophies, he gave La Liga prestige.

“Juventus are a great candidate to win the Champions League since the arrival of Cristiano, and the match against Atleti must have given them a lot of confidence.”