“I was told Fela was evil” – Daddy Freeze

Controversial Nigerian OAP Daddy Freeze took to his Instagram page to affirm his belief that the late Nigerian musician Fela was a prophet as opposed to what he was told by his aunt at a younger age.

“When I was growing up my born again aunt told me Fela was evil….
I believed her…

Now that I’m older, I have come to realize that he was a prophet sent to us by God himself. All his prophesies have come to pass, while those paid with tithe and offering to prophesy are liars from the pits of hades who worship mammon with all their essence.

Today I reflect upon my aunts words and I come to the realization that she was the evil one, selling the religion of our colonial masters as ‘good’ while destroying the sanctity of our own prophets.

If only more people had taken Fela seriously and ignored our pastors, maybe we won’t be here today, who knows.

I’m a Christian, a born again Christian and a teacher of Christianity, the real Jewish Christianity, not the British version, as Jesus did not come from ‘Jand’, he came from Jerusalem!

What our colonial masters taught us as Christianity was a figment of their fertile imagination, designed to encourage legendary embellishment and make them look like gods, so as to keep us in continued worship long after their last ship departed.

I’m here to change all that. Throw away your pastors tapes and CDs filled with lies and unlettered understanding of manipulated scriptures and get some Fela music today…..

Big shout out to Emmanuel Macron who visited us to appreciate what we have always had, but never had much value for!” 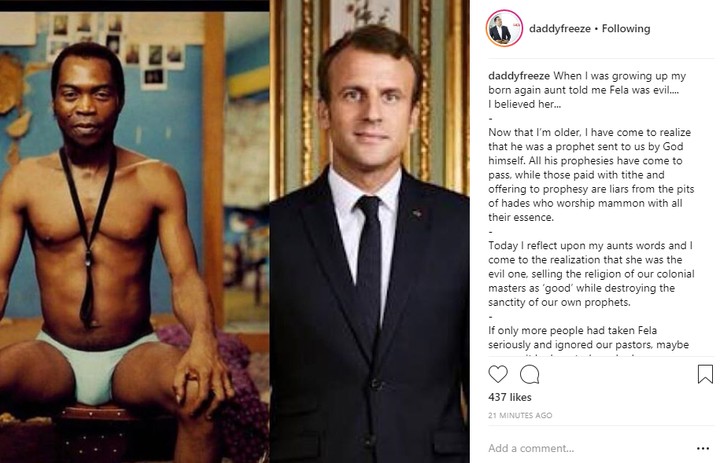