Taribo West, a former Super Eagles player, has weighed in on the lives of footballers after their retirement, especially in Nigeria.

The famous astute defender had an extensive interview Punch, where he explained other unpalatable experiences he and other retired footballers in the country are facing.

Taribo explained that when he sought to get an appointment with the government, he was bluntly asked to become a member of a secret cult to qualify for such positions.

The one-time preacher equally berated the fact that individuals who lead the sports sector of the country are not experienced in the field.

He said many of them are lawyers and doctors and stressed how it was impossible to get the sector running properly with its current leaders. 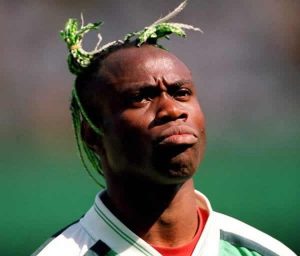 Read some parts of the interview below.

There’s a general belief that sportsmen and women lack educational qualifications, thus they are excluded from sports administration. Do you agree?

That’s total rubbish; nonsense. How educated are those in FIFA? In Nigeria, is it every politician that went to school? Some can’t even write their names. But it’s only in my country that those in positions use demonic criteria to keep people away. In other countries, if you are competent for the job, they will give it to you. We’ve got lots of ex-footballers who are graduates, lawyers, doctorate degree holders these days. Where are they? Some are doing very well in their various fields. I have been involved in the political system and things like this discouraged me from it. If it means I have to be a cultist to get a position, I’m not ready for that. I’ll prefer to drink my garri at home and be free with God.

At the time I was in politics, a running mate to a governorship aspirant in my state (Rivers), brought me money and told me to join their cult. He told me if I wanted power, they would give me position, and that if I wanted money, I would be given. But he insisted that I must be involved in their cultism activities. So, I disassociated myself from them. From that day, I made up my mind that I will drink my garri, rather than become a cultist. Like I said earlier, I’ve met politicians who can’t speak good English but because they have godfathers and belong to various cults, they’ve been empowered. It’s total rubbish. I’m not afraid to say what needs to be said.

Is this the reason why you are not in Rivers to help discover and groom young footballers for the state?

I’ve made myself available for Rivers State for so many years. But if you are not their member, they won’t give you anything to do; they won’t involve you. You have to belong to a caucus, it’s at all levels. I have personal experiences, so I know. Nobody will look at you if you are not involved. They know that someone like me will disturb their activities, so they won’t get me involved. I’m the only big name in sports in my state that they don’t call for anything. So, it’s painful but hopefully, someday this will end.