After bagging a silver at the 100m 23-year old Dina Ahser-Smith  sets British record by becoming the first Briton to win a world or Olympic title in history.

Dina Asher-Smith’s achievement of becoming the first British woman to win a world or Olympic sprint title with victory in the 200m at the World Championships seemed pre-destined, according to her childhood class tutor and others who have watched the Kent-born athlete mature.

“I remember having her in my team on sports day – she was amazing,” Papadopoulos told BBC Sport. “We were a few points behind and needed to win the last race – and who was in that last leg of the relay? Dina!

“She flew like the wind and left many of us speechless. What a finish!”

In a recent column in the Telegraph, Asher-Smith explained how crucial the Essex-born coach has been in both her physical and mental development as an athlete. 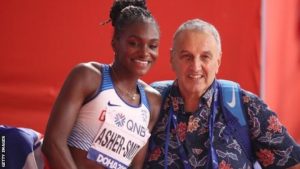 “My coach John is like family to me,” she said. “Lots of people wonder about him, as he is not the sort of person to seek out the limelight and want extra attention.

“He is happy within himself and finds joy in supporting others and helping them to fulfil their potential. He is a humble and kind person, and I love him to bits.”

Denise Lewis, who won heptathlon gold for Britain at Sydney 2000, in an interview with BBC Sport said,

her life that sets her apart.

“She has great prowess for academia and made the decision she wanted to finish university and do athletics too,” the 47-year-old said.

“Dina has always had a great mindset. Her success is not something that has just happened – it’s come as she has evolved. She has always been a determined young lady.”

Also Olympic 200m silver and world 100m bronze medallist Darren Campbell also recognised that this was an athlete worth investing time and money in, having first met Asher-Smith 10 years ago.

“I set up a school fundraising initiative with the late Todd Bennett, who used to run 400m,” Campbell told the BBC.

“When we were launching the event the first grant we ever gave out was to Dina. So yeah, probably from that meeting you knew that she was a young athlete who had big dreams and I think that is so important.

“We are talking about somebody who will line up against the greatest sprinters that Great Britain has ever produced – the likes of former world and Olympic champion Linford Christie. That’s how special Dina Asher-Smith is.”