Super Eagles striker Brown Ideye has expressed his frustration at Dynamo Kiev’s inability to qualify from the group stage of this year’s UEFA Champions League but believes that they can win the Europa League.

Ideye who scored his 13th goal of the season for Dynamo last Friday in their 4-2 win over Horvela is optimistic about the chances of his team continuing their European adventure in the Europa League and possibly emulating Shakhtar Donetsk’s feat of 2009 when the Miners won the tournament. 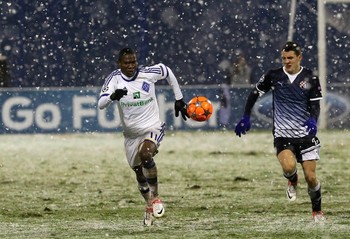 “I’m very upset we couldn’t qualify from our group because we really wanted to go to the next round but unfortunately we failed,” he told reporters.

The former Neuchâtel Xamax and Sochaux player is now second on the top scorer’s chat in Ukraine behind Shaktar’s Henrikh Mkhitaryan who has notched up 18 goals.

Your Dog Bash My Car: Dogs Taught How to Drive in New Zealand