Kamal Ajiboye, Davido’s immediate former Manager revealed via an Instagram post that peradventure he dies tomorrow, he should be remembered for his determination.

Kamal recently split up with the singer following issues with RCA.

“If I die tomorrow, just remember me for my determination and hunger. The truth has only few friends” 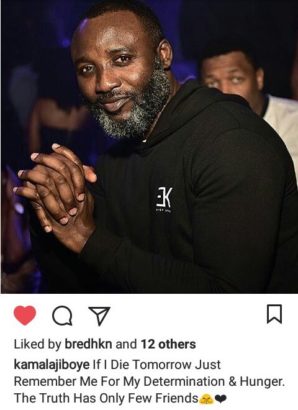 This would seem to have been triggered by the recent disaster surrounding the singer Davido who lost 3 of his friends in unclear circumstances in the last 3 weeks.

It was also gathered that before Kamal was replaced with Ayo George as Davido’s manager, he was accused of casting spells on the singer.