The Inspector-General of Police, Adamu, has reportedly invited Northern actress, Rahama Sadau for questioning following the series of reactions that her earlier posted photos stirred.

Rahama shared pictures on her social media which featured her wearing a backless gown and no hijab. This resulted in a row of reprimands and threatening backlash from the conservative northern Muslim community

The IGP, however, reacted to the “blasphemous comments” under her pictures, adding that they could incite a breach of peace.

FIM Magazine, a Kannywood magazine publication printed in Hausa, on Saturday reported that Rahama had cancelled a family trip to Dubai and returned to Kaduna state in honour of the police invitation.

The magazine further added that the actress was almost arrested in Abuja, but fortunately for her, a senior police officer was present to intervene in the situation.

He pleaded on her behalf and urged his colleagues to allow her to present herself for questioning in Kaduna.

Conveyed in the letter addressed to the Kaduna State Police Commissioner and signed by the Principal Staff Officer to the IGP was an order from the IGP to the CP, directing him to take proactive measures to prevent any developments that could threaten public peace and security.

The letter signed by DCP Idowu Owohunwa reads in part, “I am to convey the directive of the Inspector General of Police that you treat proactively with a view to ensuring that the development does not result in any act that could threaten public peace and security.

“The Inspector-General of Police further directs that you furnish him with updates, accordingly”. 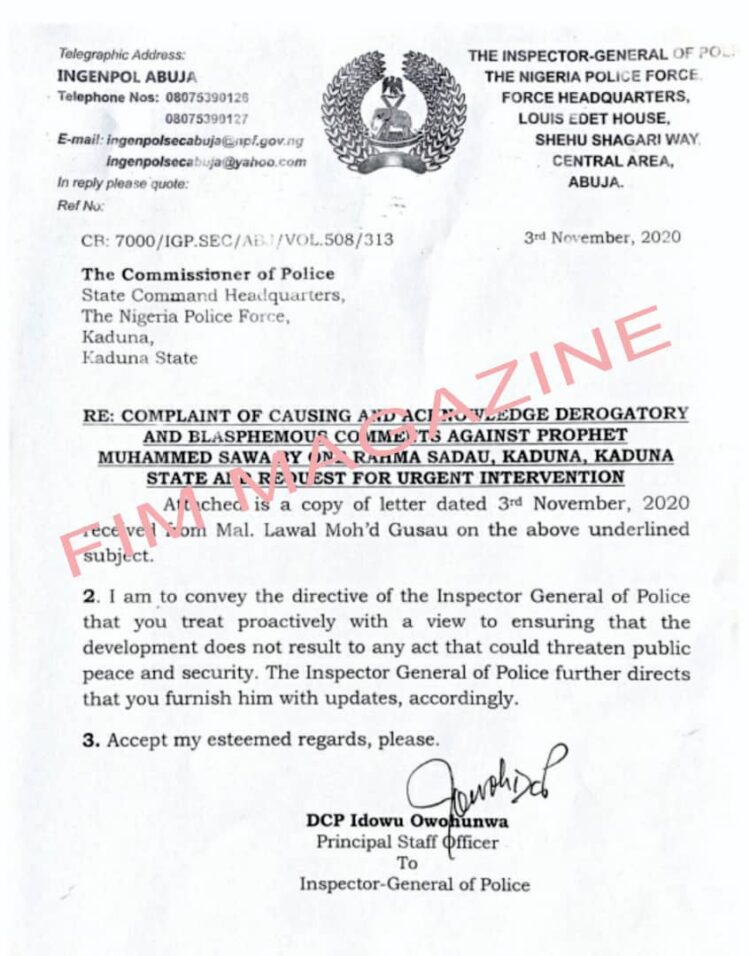 Umahi vows showdown with herdsmen coming to Ebonyi with AK-47

Chad’s President Dies In Clash With Rebels, Son Takes Over