Some workers of the Ikeja Electricity Distribution Company have been caught stealing the transformer belonging to the community at Adebayo Mokuolu Street in Anthony Village.

According to the information gathered by correspondence of Vanguard news, the workers who were with branded truck claimed that the reason they were setting off with the community’s transformer was because the flooring underneath the transformer had gone bad thus required repairs. 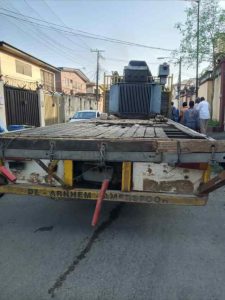 Security men of the community stopped these individuals immediately they noticed unusual activities, as the flooring beneath the transformer was in good shape contrary to their claim.

Although the community members were able to stop the officials from stealing the transformer, some other important items were still stolen.

An eye withness, who narrated the theft said;

“certain individuals, along with a branded truck, claiming to be a staff of this Ikeja Electric, attempted to cart away with the community transformer. Their explanation was that the flooring beneath the transformer had become faulty and had to be redone.

“They were, however, stopped by some security officials in the neighbourhood who acknowledged that there was no need for that, seeing that the floor in question was in great condition.

“They were, therefore, able to stop an illegal removal of the transformer from taking place. Illegal: because they had arrived without any of the usual accompanying security officials to ensure their protection and also without any sort of prior notification to the residents’ association of this removal.

“Thanks to the quick thinking community residents, the transformer was left behind, but not before the officials from the Ikeja Electricity Distribution Company had carted away with some important components to be attached to the main plant. And thus, the neighborhood was plunged into darkness for

“on Monday, 25 November 2019, a representative was sent to the Alausa office to report the case. Mr Lanre Yusuf (Business Manager, Obanikoro) was on hand to receive him and was amazed at the effrontery of these individuals, claiming zero knowledge of any such instruction to move the neighbourhood’s transformer.

“After a quick check for verification, it was clarified that these individuals were most likely acting on their own. In order to speedily rectify the issue, a different group of staff from the Ikeja Electricity Distribution Company (in a truck with Lagos plate number GM77LND) was deployed to fix the transformer and restore electricity on the same day.

“These new staff, taking their time before finally arriving after dark, claimed that the components returned were not functioning properly and attempted to leave with said components without fixing the transformer.

“As it stands, an entire community of hard-working Nigerians is currently in the dark with little choice but to depend on candles, generators and the forces of nature to survive the last few days, pending the resolution of this strange issue,” he said.