As Nigeria’s busiest city, Lagos is a beehive of activities every other day. While honest and hardworking Lagosians commute regularly across the metropolis to make a living, pickpockets and other social miscreants are also on the prowl, looking for who to rob.

A Twitter user, Praise George, recently took to the micro-blogging site to recount his friend’s experience in the hands of a pickpocket.

George said his unnamed friend was in the state capital, Ikeja, for an undisclosed purpose when a pickpocket stole his wallet.

According to him, the friend was left stranded as his transport fare was in the stolen wallet.

George said that instead of begging for money or a ride to his abode in Akute, Ogun State, his friend decided to embark on the 14 kilometre-long journey home on foot.

George added that he decided to share the story to discourage people that had formed the habit of begging others for everything, noting that begging had been institutionalised in the country. 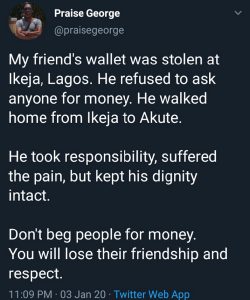 He added, “Your friends don’t owe you money.

“Friendship is not a right to demand money from your friends.

“Friends owe you friendship, not money.

“Many people destroy great relationships because of begging.

“If you keep begging, your friends will avoid and eventually abandon you.”

However, some social media users said the victim’s action was foolish, adding that there was nothing wrong in asking for help when it’s needed.

Tweeting from @Slimshadys5, one commenter wrote: “Begging?
How does that relate to begging though? How would I lose my wallet & walk home when I have friends that will willingly help me because if it were to be them I’d do the exact same.

“This life is about Give and Take tho. Nothing wrong in asking for help and being of help.”

Another commenter, @CalabargirlUK wrote: “Well, I do understand your friend and his pride of not begging or inconveniencing anyone.. but,not everyone could walk that long without calling someone to ask for help..we are different mbok.. besides we still have friends who will prefer we reached out.

“Instead of suffering alone.. I could be that kind of person sometimes,but I have friends who would prefer I call them for help esp when it’s quite difficult and for me this would have been one of those moments ..#justsaying”

Wale Adetona, another commenter, asked, “Trekked from Ikeja to Akute cos ‘dignity’?

“Is he preparing for World War 3?”

Joey wrote: “Naaa. This isn’t it Chief. We have friends to help each other. If my friend can’t call me to book him an Uber from Ikeja to Akute, at a time like this, then I have failed as a friend.”

Give Muslims Their Own 1st January -MURIC Demands

France, Germany Condemn The Killing Of General Soleimani By US Drone

“They’ve taken everything I have” – Ibadan doctor robbed…