Popular comedian and activist, Debo Adedayo aka Mr Macaroni has said he would vote for the candidate of Labour Party (LP), Peter Obi in the 2023 presidential election.

He made the disclosure in a tweet on Saturday.

However, Mr Macaroni maintained his stance that he would not campaign for any politician.

He wrote, “I do not and will not campaign for Politicians.

“I cannot force or beg any Nigerian to vote for a particular candidate but come 2023, the person that I will cast my vote for is Peter Obi!!

“And that is final on this matter!! Enough is Enough!!!” 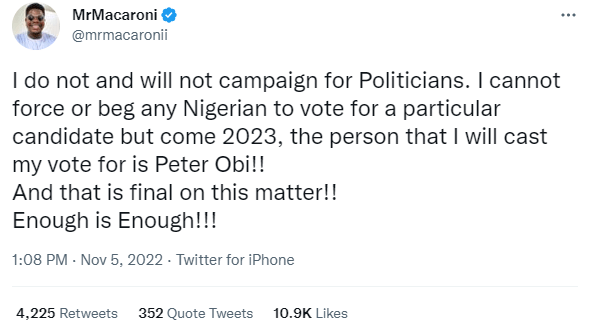 The Herald earlier reported that the comedian and actor has frequently stated that it was not his style to campaign for politicians.

He had instead urged voters to “vote wisely” and not allow tribal and other primordial sentiments becloud their sense of judgement when choosing a president in 2023.

In August, Mr Macaroni urged the youths to remember the “pain and sadness of  October 2020” when deciding who to vote for in the 2023 general election.

On yet another occasion, he said that the ruling All Progressives Congress (APC) and the main opposition Peoples Democratic Party (PDP) belonged to the “same WhatsApp group”.