Former presidential aide, Reno Omokri says he is backing Alhaji Atiku Abubakar for the 2023 presidency because he has experience “addressing the religious extremism which has led to Boko Haram and banditry”.

The follower, Stephen Ofuru, had expressed disappointment in Omokri for backing the Peoples Democratic Party (PDP) candidate ahead of the Labour Party candidate, Peter Obi. 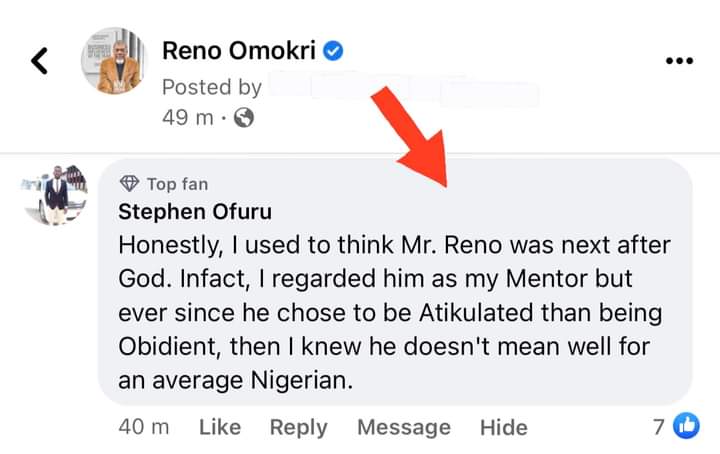 Responding, Omokri described the Labour Party candidate, Peter Obi as an “excellent candidate” and the All Progressives Congress candidate, Asiwaju Bola Tinubu as the “Best Governor in this Fourth Republic”.

He added that Peter Obi was not his enemy.

Omokri said he however preferred Atiku because of his antecedents managing religious extremism that could breed insecurity, one of the greatest challenges now confronting the country.

He said, “Millions of Nigerians support other candidates apart from Peter Obi. I appeal to you his supporters to step back from this extremism. And I am not sure it is helping your cause. Peter is an excellent candidate. Bola is the best Governor in this Fourth Republic. However, I prefer Atiku.

“The reason I support him is because he has experience in addressing the religious extremism which has led to Boko Haram and banditry. He did it when he led the Obasanjo administration’s effort to bring calm after the Sharia crisis of 2000.

“I also support him because in his private life, he is a successful businessman who employs more people than some state governments. Therefore, he can help create jobs for our teeming unemployed youths.

“Also, he is a lover of education and invested in the American University of Nigeria, Yola, and gave scholarships to hundreds of indigent Nigerians from every geopolitical zone. That tells me he will be able to resolve the ASUU crisis.

“Do you know how countries descend into civil wars? One way is when supporters of one candidate in an election see supporters of another candidates, not as citizens who have made a different choice, but as enemies of the nation and her citizens.

“I am not Peter Obi’s enemy. However, even if I was, Peter Obi is not Nigeria. To oppose him does not make me an enemy of Nigerian citizens. The enemy of Nigeria is anyone who wants to take away our rights as Nigerians to freedom of association, by forcing us to support one particular candidate or else be considered enemies of Nigeria.

“They tried it in Rwanda and one million people died. May we learn from their experience and not repeat the same thing here.”

“It’s a big insult to compare Tinubu to Peter Obi” –…