Imo State’s governorship candidate of the APC, Senator Hope Uzodinma, has made some derogatory comments against the current governor of the state, Rochas Okorocha.

The embattled governor has been in the news consistently for some days after INEC omitted his name from the list of senators-elect and refused to present him a Certificate of Return.

Senator Hope stated that he should go ahead and hide his face in shame and stop making negative statements about the Independent National Electoral Commission, INEC.

The Senator equally commented that if Okorocha attempts to walk on the streets of the state, he was certain that the residents would stone him bitterly.

Furthermore, he mocked him for not legally winning a Senatorial seat even with the fact that he was a sitting governor in the state. 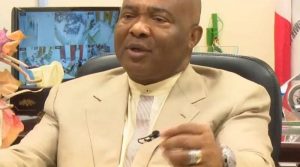 “I thought by now Okorocha should be hiding his face in shame after he lost his bid to install his son-in-law and win his senatorial election. Despite all the billions he spent to stop me and the APC in the state from the results from the polling units I won the election and we will prove it. “But Okorocha has lost his deposit and he is finished politically. He is an expert in running people down but God has punished him today. This same man worked against the APC and he has the gut to speak about others. I challenge Okorocha for a walk in the streets of Owerri if Imo people will not stone him.

“Thank God all his conspiracy against us has ended and he has buried himself politically. I expect by now he should be apologizing to the people of Imo State for the crime against God and humanity he committed. I will reclaim my mandate which Okorocha and Ihedioha stole last weekend and then I will have something to tell Okorocha,” he said.

Soldiers collaborated with thugs to intimidate us in Rivers – INEC

The Asaba Declaration by Southern Governors – By Reuben Abati