“In Akwa Ibom, We Do Not Kneel For Our Elders” – Lawyer Blasts Man For Kneeling Before Godswill Akpabio

A popular lawyer, Inibehe Effiong has reacted to a photo of a young man kneeling before the Senate Minority Leader, Sen. Godswill Akpabio.

The lawyer posted the image on his Facebook page on Sunday.

In the photo, the young man was seen kneeling while clutching a T-shirt bearing a photo of Akpabio, a former Governor of the state. 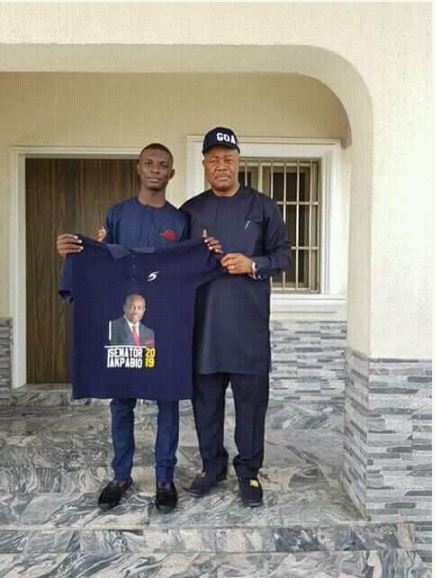 Effiong, who said that Akwa Ibom people do not kneel before their elders, queried where the young man got the strange practice from.

He said, “It will take decades for us to recover from the brutal damage that Godswill Akpabio has inflicted on the psyche of Akwa Ibom people.

“How a man who struggled in Lagos State like I am struggling now before Governor Victor Attah brought him home to serve as a Commissioner suddenly assumed the position of Alpha and Omega baffles me.

“The so-called political youths have turned themselves to willing slaves and tools in the hands of a dictator who could not create jobs for them.
What else will make a young and energetic young man to kneel before a fellow human being like him holding a shirt bearing the face of the dictator if not mental slavery and low self-esteem?

“Why is it so difficult for these people to see that Akpabio is just an ordinary human being like every other person and not a supernatural being?
This is neither humility nor respect for elders. In Akwa Ibom culture, we do not kneel to greet our elders. We do not even bend to greet.
This is idolatry.
SLAVES IN LOVE WITH THEIR CHAINS.”

Police arrest teenager for stabbing another to death in Kano

“No one is giving up hope here” – Presidency assures of Chibok…