Following its fallout with the Federal Government over the arrests and detention of civilians in the country, Amnesty Internation Nigeria has issued a warning about the impending sanctions which will be served to erring politicians by International bodies.

This was aired through the body’s chairman, Auwal Ibrahim Musa, during a telephone interview with  Vanguard.

According to him, Amnesty International has fought on the side of President Muhammadu Buhari when the country was under military rule, many years back. Hence, calls to suppress criticism of the current administration may attract sanctions from international bodies, some of which is already being actioned in the form of visa denial by the United States of America.

Auwal said, “We cannot keep quiet because if we all keep quiet it will come to each individual and all, and if we don’t speak out definitely we will be in trouble. We have to constantly remind them that they cannot continue to do this.

“These are people we also fought for their rights and like Punch Newspaper also did the analysis on how all these characters, what Amnesty International did for their situation when they were been victimized including President Muhammadu Buhari.

“It is just that they have short memory and they have forgotten today that they will leave power tomorrow and they can become victims of another political class and that is why organizations like ours which are not political, religious and not having any ulterior motives rather than protect the rights of everybody they want to attack us for that you are just doing harm to yourself because tomorrow you will discover that you will become victim of the same political class because Nigerian politicians witch hunt one another; today victim tomorrow they may be the oppressor that is how it is with Nigerian political class and tomorrow they will now be looking for who to protect them.” 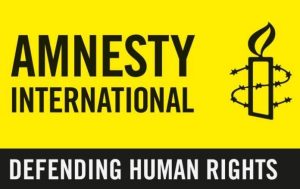 Speaking on the body’s resilience over the years, the chairman continued, “We must sustain and continue with this effort. Some of us have been involved in this for the past 25 years, and anybody who knows us know we have been at this.

“So no shaking and no blackmail can stop us from doing what we are doing. People tell me to be careful and I said let them kill me and if they kill me I know I have not died a waste but I know have died for a course helping humanity. So if they like let them do that.

“We faced the military regime so why can’t we face this civil government. I can’t imagine how we have waged war against military dictators and now I will keep quiet for what? Is not possible.” INEC: Need to amend the Constitution and electoral law (4)(Opens in a new browser tab) Meanwhile, according to him more sanctions will be meted out to some political office holders as some are being denied visas while others who have been issued visas unknown to them their visas are canceled by the American Government.

“International bodies are set to issue their statement on this development and globally people are aware of what is going on and they are condemning it and this will be of great interest in the next coming days and if the state continues with this I can assure you that some officials will face sanctions.

“Already the American government is canceling and denying visas to some of these corrupt people who are also perpetrating violence. Some of them are not aware that their visas are canceled. So a lot of sanctions are likely to going to happen.”

Also, read: Peter Obi reacts to news of being denied US visa