“It is a sin to scream God’s name during sex, even as a couple” – Prophet

A fairly popular prophet in Ghana, Pastor Kumchacha who owns the Heaven’s Gate Ministry, has made some intriguing comments about ladies who moan by screaming “God” and Jesus Christ” during sexual intercourse.

He emphasized that such ladies are bound to go to hell as it was a devilish gesture.

According to him, it does not matter if the lady was married to her sex partner or just in courtship, as long as she mentions God’s name, going to hell was the punishment for it.

During a live television discussion with UTV, pastor Kumchacha stated, “Whether you are making the love with your husband or your boyfriend, once you scream the name of Jesus Christ while in the act there is no way you will not go to hell.” 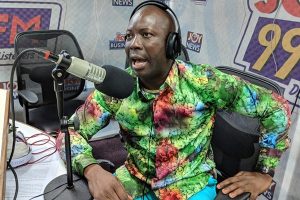 He further iterated that there are some angels who have been assigned to sanction anyone found guilty of the sin and the punishment includes flogging on the judgment day, followed by being tossed into hell fire.

He continued, “shouting the name Jesus Christ and Holy Spirit under such instances constitutes a grievous punishable by being thrown into hell.

“God is not his personal property it is the omnipresent God we all know. Read Exodus 21:1-7 it says you should not mention the name of God in vain. So while being romanced if you are mentioning the name like that you commit a big sin. If care is not taken you could be flogged one day by invisible hands while in the act.”

Miller fails drug test ahead of fight with Anthony Joshua