The wedding took place in Toronto, Canada, but the couple have since relocated to Hong Kong, where Ng’s mother lives.

Ng, also 19, is Chan’s love child with ex-beauty queen, Elaine Ng, with whom he had an affair in the late 90s.

Chan has been married to Taiwanese actress, Joan Lin since 1982.

Ng and Autumn’s love story came to public knowledge in May, when they declared in a YouTube video that they were homeless in Canada, blaming their “homophobic” parents for their situation.

An image shared on Autumn’s Instagram page was captioned: “Back to Hong Kong as wife & wife.” 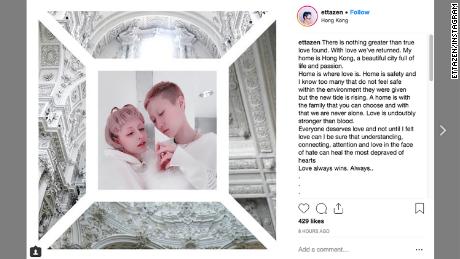