The Japanese doctor had promised the Nigerian team $30,000 for each player if they won gold. The team didn’t win Gold, but they did enough to win the Bronze medal and they were presented with $200,000 for the team and $190,000 for coach Samson Siasia.

Doctor Takasu was touched with the plight of the team who had been stranded in Atlanta USA before finally making it to Rio mere hours before their first game against Takasu’s home nation Japan.

Nigeria’s U-23 team have so far won Nigeria’s only medal at the Olympics with a 3-2 win over Honduras. They had raced ahead into a three-goal lead before the Hondurans made a valiant attempt to take back the game by returning two goals in the last 20 minutes.

Nigeria were able to hold on till the end and they ran out deserved winners.

The cash prize was given to the team by Dr. Takasu personally as he had been advised to do so amidst fears that if he’d given the money to the NFF or any other body it might not have made it to the players.

You can check out a photo of the doctor and team captain Mikel Obi along with coach Samson Siasia below. 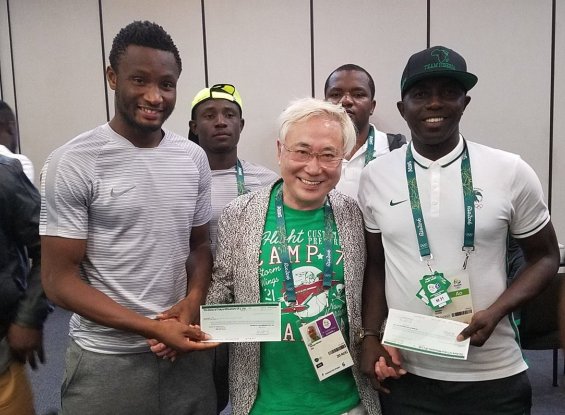