Gabriel Jesus found the back of the net twice to keep up with his good form for Manchester City. On a night where David Silva surpassed Joe Hart as the club’s most fielded player, with 267 appearances, City were on top of their game for most parts.

The match ended in 3-0 after Wolves put the ball in their own net. But they would blame the defeat on the fact that wily Boly was shown a red card in the match.

After scoring 5 goals in the last two Cup fixtures, Guardiola was smart to have included Jesus in the starting line.

The decision soon paid off as Manchester City took the lead just after 10 minutes through the Brazilian. A sleek pass from Aymeric Laporte Kept Leroy Sane on the run, and as he got to the ball he swiftly connects with Jesus by sliding a low inch-perfect pass to him, setting him up to a fine finish. 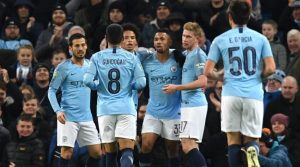 Wolves almost believed they could get a leveler until Boly got a red card for his tackle on Bernado Silva in the 19th minute.

Manchester City continued to press and got their 2 goal lead before the end of the first half.

Ryan Bennett manhandled Raheem Sterling in the box. The resulting penalty kick was then converted by Jesus to make it a brace for the night.

It took a long time before City got their last goal as City created chances all through the game. Kevin De Bruyne’s shot was, however, the most interesting as it was headed for the net before it was dangerously deflected by Wolves captain, Coady.

The win implies that Machester City and now back to four points behind League leaders, Liverpool. ­­­­­