Gabriel Jesus, Riyad Mahrez and Raheem Sterling were all on target as Man City overcame a resilient Everton side at Goodison Park on Saturday afternoon.

The host were hit with injury early on in the game as former Arsenal star, Theo Walcott was stretched off barely minutes into the game with another ex-Gunner Alex Iwobi coming on as his replacement. 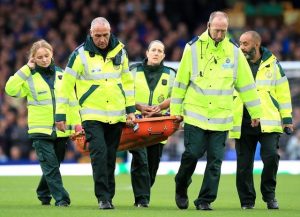 Gabriel Jesus gave Man City the lead in the first half but ten minutes from half time Everton equalized through Dominic Calvert-Lewin. 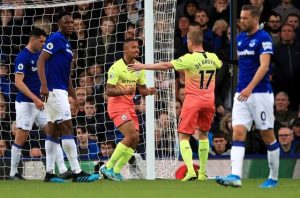 The host were made to fight hard for their win as the game became open and chances came thick and fast at both ends of the pitch.

Raheem Sterling should have scored after being put clean through by a defensive splitting pass from Algerian, Riyad Mahrez but his effort went wide.

Minutes later the English forward was at the thick of it again as he connected with another Mahrez cross but his first touch with the chest let him down and the goalkeeper gathered easily.

Both sides then had further chances but it was City who secured the points after Mahrez beat Jordan Pickford with a low free-kick and Sterling struck via the woodwork. Sterling’s shot cannoned off the crossbar and just crossed over the goalline enough for the goal to stand.

Bernardo Silva, along with David Silva and Sergio Aguero, came on from the bench as City boss Pep Guardiola rests his key players.

1-3 the game ended in favour of the champions. City have now closed the gap between log leaders, Liverpool and themselves to just five points. Liverpool are yet to drop points this season taking 21 points from a possible 21.