Jonathan may sacrifice Sambo on the altar of 2015 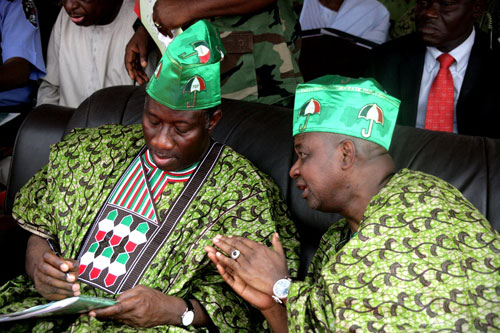 Fresh indications have emerged signaling that President Goodluck Jonathan may drop his vice-President, Namadi Sambo in order to appease certain powerful Northern interests ahead of the 2015 elections.

Jonathan’s decision to select another running mate is seen as key to ensuring he receives wide support from Northern power brokers. Sources close to the center report that it was this decision that stopped some Northern governors from decamping to the All Progressives Congress last year.

Governors said to be in the offing to replace Sambo include, Governor Sule Lamido of Jigawa; Governor Babangida Aliyu of Niger; Governor Isa Yuguda of Bauchi; and Governor Ibrahim Shema of Katsina.

A source told Nation, “Don’t be deceived by the denials and counter-denials. Would you have expected them to publicly accept the plot? What I know is that these persons have been meeting and Sambo might as well be on his last tour of duty as vice president unless something drastically changes the run of event.

“I can tell you that the strategic choice by Aliyu and Lamido to remain with the PDP was due to the promise extracted by some political heavyweights in the party to make one of them, preferably Lamido who is considered to be highly disciplined and with impressive political savvy in the North, to be nominated as vice president after Sambo has failed to command the kind of respect expected of anyone in that position in the North.”

“First, it was understood that the failure to bring the Boko Haram menace to an end or even try to talk to its leadership to stop the carnage and come to the roundtable for a peace talk was due to the fact that most persons in the North still do not recognise Sambo as a Northern leader. They see him as a businessman who knows little or nothing about the politics of his domain.

“What if I told you that Shema is also scheming to be vice president in spite of his repeated denials and there is a belief that former President Ibrahim Babangida might not support Babangida Aliyu as vice president due to some reasons?”