The Speaker of the House of Representatives, Femi Gbajabiamila, has identified a Department of State Services (DSS) official, Abdullahi M. Hassan, as the security operative that shot a vendor, Mr. Ifeanyi Okereke in the FCT on Thursday.

He disclosed this in a statement he personally signed on Friday.

Gbajabiamila had come under intense criticism on social media, especially Twitter, over the shooting of Ifeanyi Okereke also called Elechi.

But in the statement, he said he was still “deeply shaken” by the incident.

He maintained that the vendor was “going about his business, trying to make a living for himself and his family.

“There is no reason for his life to have ended the way it did.”

The speaker explained that he has handed Abdullahi M. Hassan over to the DSS for investigation and appropriate administrative and judicial action.

He reiterated that the security operative has been suspended from his security detail.

“I expect, and I will see to it that the family of Mr Ifeanyi Okereke receives the full measure of justice so that their bereavement is not compounded by any actions that can cause them further pain and suffering,” the statement further read.

The speaker disclosed that he has invited the victim’s parents over to Abuja to personally apologise and pay his condolences. 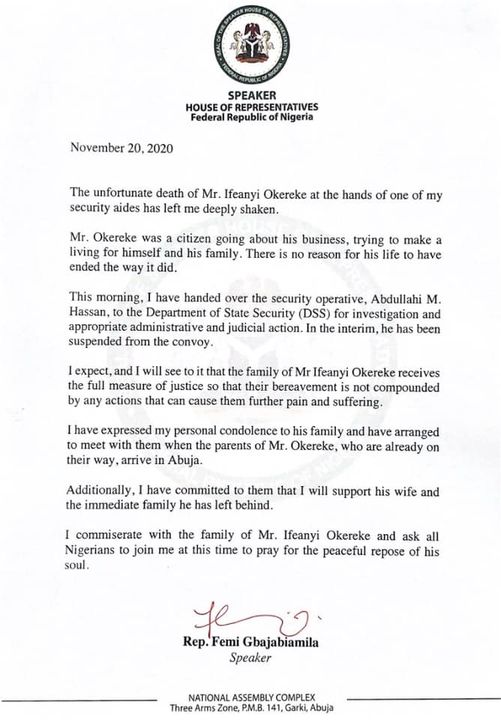 Restructuring: Nigeria will go “on fire” if Buhari doesn’t heed…