Afro hip-hop star, Azeez Fashola, who is popularly known as Naira Marley has been ordered to remain in prison custody by Justice Nicholas Oweibo.

The judge, who presided over the first hearing of the case at the Federal High Court in Lagos, gave the verdict on Monday, May 20, 2019, after the singer pleaded not guilty to the charges against him. 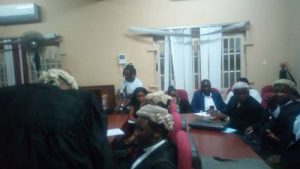 Naira Marley was apprehended alongside four others including Zlatan Ibile about 10 days ago.

While others arrested were freed, Naira Marley remained in custody and was subsequently slammed with 11-count charge bordering on credit card fraud.

He was then arraigned in court today for the hearing of the case, and since he denied all the charges read against him, Justice Oweibo adjourned the case till May 30, where the bail application submitted by defendant’s lawyer would be reviewed.

Until then, the singer would remain behind bars.

Drug dealers are killing our officers, NDLEA cries out