American rapper, Kanye West has continued his Twitter rant against Sony Music and Universal, a day after he vowed not to release any more albums on the labels.

In what appears to be the text of a discussion with a lawyer, the artiste highlighted his options for getting out of the contracts.

The situation is expected to delay the release of Kanye West’s Donda album named after his late mother.

He disclosed on Monday that he was “not putting no more music out till I’m done with my contract with Sony and Universal.”

According to Billboard, in January 2019, West filed a pair of lawsuits against EMI, which is majority-owned by Sony, the song publisher that has administered the rights to his songs since 2003, and against Roc-a-Fella Records, UMG Recordings, Def Jam and Bravado International Group.

EMI sued West in March 2019 for damages after what it called in court documents a response to “West’s efforts to renege on his bargained-for contractual obligations to the company.”

In January 2020, a settlement between West and EMI had been reached.

In yet another tweet on Monday, he wrote, “I need to see everybody’s contracts at Universal and Sony.

“I’m not gonna watch my people be enslaved.

“I’m putting my life on the line for my people.

“The music industry and the NBA are modern day slave ships.

The artiste explained in a Tuesday tweet that he got no response from either Sony or Universal.

The lack of response appeared to have pushed him to seek legal counsel.

See text of his chat with the undisclosed legal counsel: 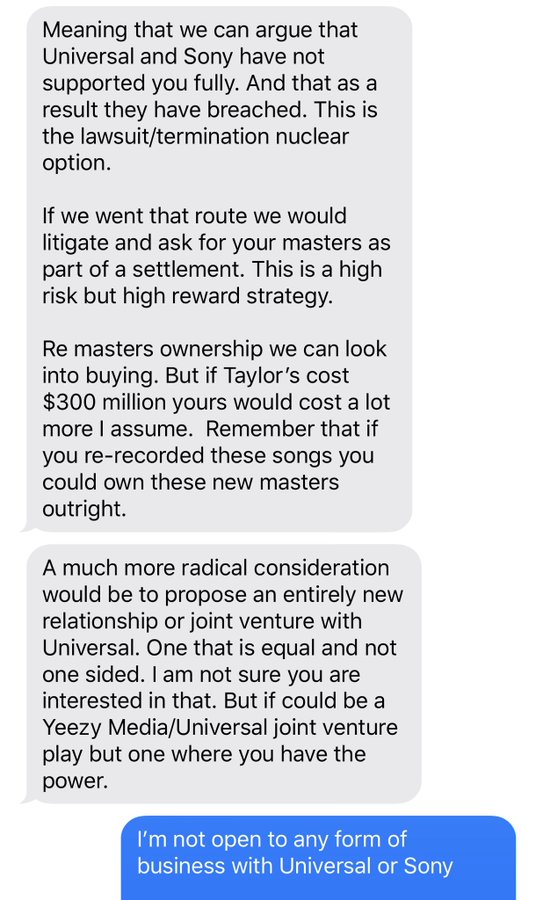 COVID-19, Democracy And The Task Of Nation Building – By Goodluck Jonathan