Katy Perry Bares It All In Post-Baby Body Picture (LOOK)

Katy Perry stripped off her clothes to show off her post-baby body in a photograph to her fans and well wishers.

The 35-year-old recording artiste , who welcomed her first child with fiancee, Orlando Bloom, into the world last week, revealed the joys of motherhood like just five days after giving birth.

The artiste who appeared elated shared the photo during the MTV Video Music Awards that held online due to the pandemic.

Katy wore what appeared to be a nude nursing bra and a grey high-waisted underwear as she struck a pose in her bathroom mirror. She donned a bare face without makeup as she showed off her post-baby figure.

She went on to write a hilarious note on the picture: “Hair and makeup by: @exhaustion,” before tagging the makers of her bra and underwear.” 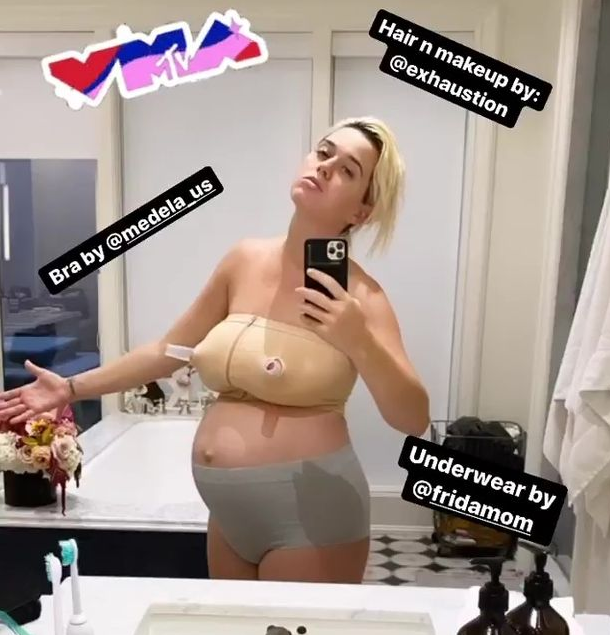 Katy Perry and Orlando met for the first time at a Golden Globes after-party in 2016. According to onlookers, the two were acting quite flirty and even left the event together.

By April 2016, it was pretty clear that the singer and the movie star were an item since they attended a wedding together in Aspen, Colorado and the music festival, Coachella, back-to-back weekends.

After a year of dating, the couple called their relationship quits, but later reconciled.

Orlando proposed on Valentine’s Day in 2019 with a unique ruby engagement ring. On March 4, 2020, Katy revealed she was pregnant with Orlando’s child in her latest music video for “Never Worn White.”