The 25th of September should probably be dubbed the ‘Laugh at Trump’ day as the American President seemed to suffer on mishap after another.

Following a 30-minute plus speech at the United Nations General Assembly which was marred at the very beginning with delegates laughing derisively at a statement Trump made, he was also trolled on Twitter after making a typo while defending Supreme Court nominee, Brett Kavanaugh.

As is his wont, the President took to Twitter and said: “The Democrats are working hard to destroy a wonderful man, and a man who has the potential to be one of our greatest Supreme Court Justices ever, with an array of False Acquisitions the likes of which have never been seen before!”

While the tweet was deleted and was replaced by a typo-free tweet, it was too late as most of the Twitter world had seen the mistake and were merrily trolling the President. 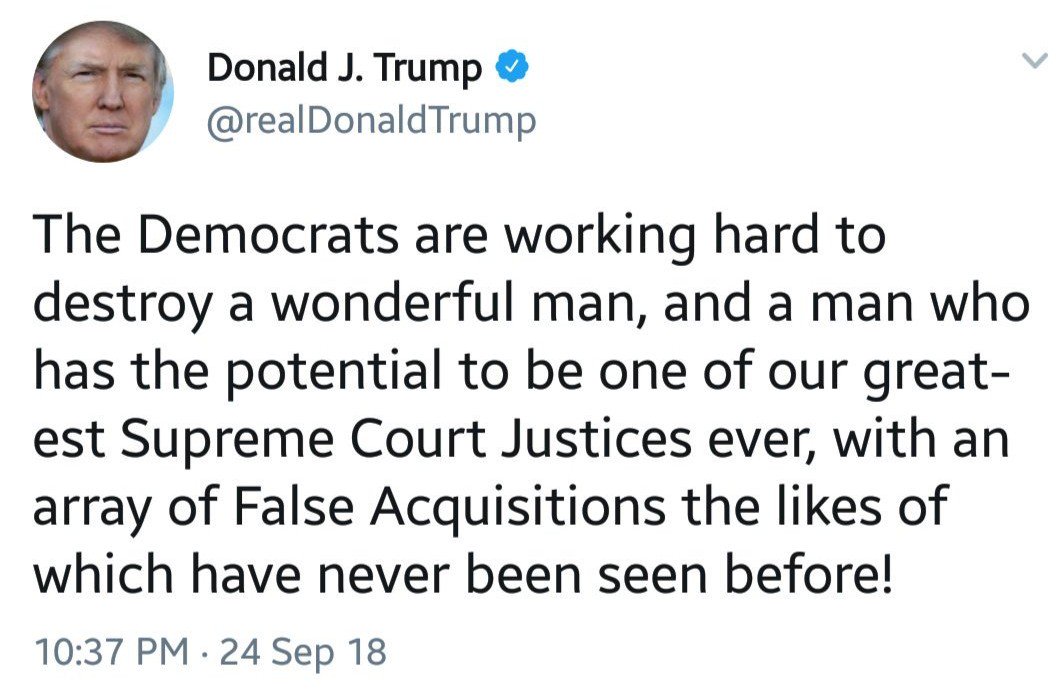 Many also took the time to remember the infamous ‘Covfefe; incident

Recall that Trump has also made a blunder like this when he spelt out the word ‘covfefe’ which many believe was supposed to be ‘coffee’.

The President had left that one hanging, however, as at the time, it was seen more as something amusing than embarrassing.

You can check out some of the hilarious reactions below

Isn't a 'False Acquisition' when you hire a contractor to work on your buildings and then never pay them? pic.twitter.com/49OHPivsnT

So is Donald saying that, e.g., Kavanaugh's law degree was a false acquisition? Or what?

Nobody expects the False Acquisition! https://t.co/FoqOJSuquc

I for once agree with Trump. Covfefe IS a false acquisition.

When Robert Mueller is finished with his report, he should get it published and call it:

“The False Acquisition of America”

"False acquisition" would sort of describe the Trump Presidency, would it not? pic.twitter.com/28qqjiHuG9

The supreme court nominee in question, Brett Kavanaugh, was accused of sexually assaulting a woman sometime in the 80s during a party.

The judge has vehemently denied this but the judge and his alleged victim will be subjected to a hearing in which both sides would be thoroughly examined.

Trump has been adamant that Kavanaugh has done no wrong and has blamed the Democrats as using the scandal as a means with which to hold up his appointment as a Supreme Court judge.

Nigeria In Danger of Slipping Back Into Recession- CBN

Anambra indigene on course to become US senator

US Congress Aspirant Says Beyoncé ‘A Daughter Of Satan’