Six-year-old Emmanuella Samuel is doing Nigeria proud with her art.

The year was quite a remarkable one for the child star, as she bagged awards, traveled round the world, performed in shows and even starred in her first ever International movie.

Emmanuella came into limelight after one of her comedy skits, “this is not my real face o”, went viral.

The 6-year-old child comedienne, has now been featured on CNN as Africa’s youngest most popular comedienne on the internet. 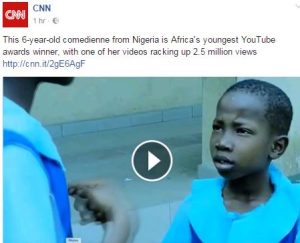