Kim K Robbery: “You Cannot Display Your Wealth and Then Be Surprised”

A designer Karl Lagerfeld has spoken on Kim Kardashian being robbed in her hotel in France expressing surprise that there wasn’t more security around her.

Speaking in a video shared by The Telegraph, Lagerfeld said; “I don’t understand why she was in a hotel with no security and think like this,

“If you are that famous and you put all your jewelry on the net, you go to hotels where nobody can come near to the room. You cannot display your wealth and then be surprised that some people want to share it with you.”

The designer who is resident in Paris bemoaned the knock on effect this would have on the city especially with the terrorist attacks that have hit the country in recent times.

“Image-wise, I think it is very bad,” he told reporters. “We make all the efforts to make Paris appealing.”

Despite his harsh words, Lagerfeld still felt bad for the ordeal that Kim went through and he posted a message of support after the attack. “Dearest Kim, We are all with you. Love, Karl,” he wrote on a note photographed and shared on social media. 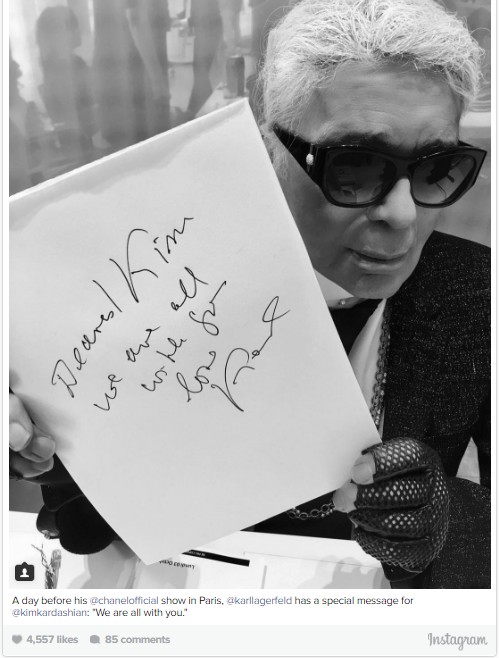