Lagos state, one of the most populous cities in Africa, has been rated the most dangerous for women to live in.

A poll which sought the opinions of experts in 19 of the world’s biggest mega cities was carried out between June and July 2007 by Thompson Reuters.

The conclusion was reached after an analysis that centered on four major factors namely: Sexual violence, Access to healthcare, cultural practices and economic opportunities.

The opinion of over 380 experts in women issues was taken in carrying out the survey.

While Lagos ranked eighth, Cairo, the capital of Egypt was rated as the most dangerous in the world.

In Lagos state, the Governor, Ambode Akinwumi had recently revealed that 574 cases of domestic violence and sexual harassment were recorded within the same time as the survey. 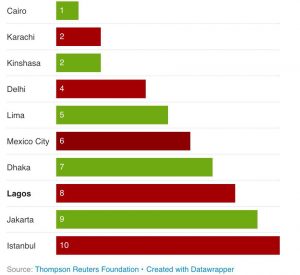 Where is President Buhari?

Why Sweden is phasing out use of AstraZeneca COVID-19 vaccine