Muslims in France and Italy turned up in droves for mass in a show of defiance to ISIS over the recent killing of a priest.

A number of Muslims turned up for mass at the Gothic cathedral in Rouen, where 85-year-old French priest Rev Jacques Hamel had his throat slit by two teenage Islamic extremists on Tuesday.

Some of the Muslims sat in the front row, right across from the scene of  Adel Kermiche and Abdelmalik Petitjean’s barbaric act, both 19, filmed themselves performing an Islamic sermon before slitting the elderly priest’s throat.

The boys, both 19, filmed themselves performing an Islamic sermon and then proceeded to slit Hamel’s throat.

Churchgoers embraced and shook the Muslims who came for mass and they were also applauded when outside they revealed a banner preaching love which said, ‘Love for all. Hate for none.’

Dominique Lebrun, the archbishop of Rouen, said that he was very moved by the gesture and that it showed courage.

Meanwhile, Jacqueline Prevot a churchgoer had this to say about the gesture, ‘Look at this whole Muslim community that attended Mass.

‘I find this very heartwarming. I am confident. I say to myself that this assassination won’t be lost, that it will maybe relaunch us better than politics can do. Maybe we will react in a better way.’ 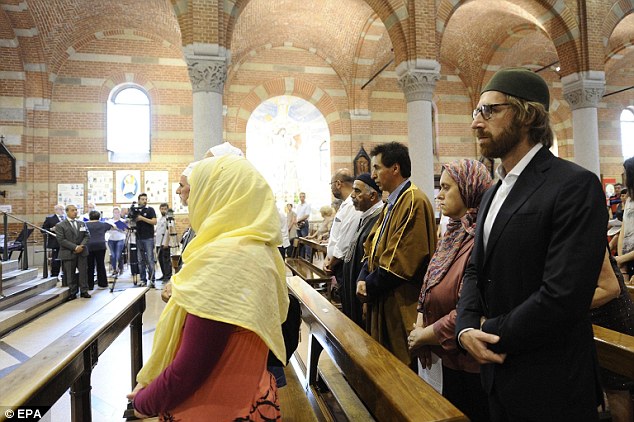 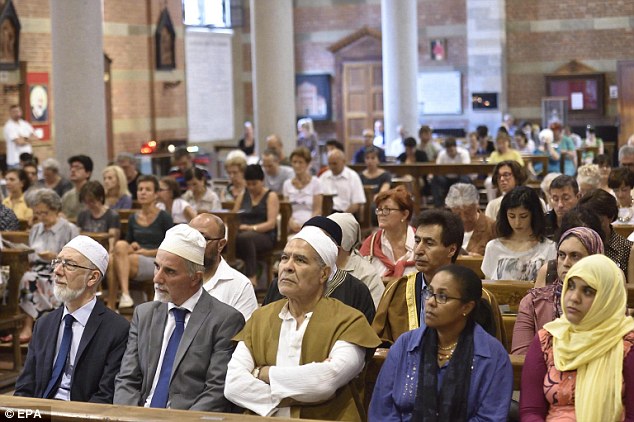