Funeral arrangements have been concluded for late popular  On Air Personality, Tosyn Bucknor who was found dead in her home last week Monday.

Popularly known as the ‘Area Mama’ on Lagos airwaves, the 37 year old Tosyn was born with sickle cell anaemia to popular Nigerian musician and journalist, Segun Bucknor who died in 2017.

The Inspiration FM OAP was found dead by her husband, Aurelien Boyer in their home when he arrived from work in the evening of Monday last week.

Fans of the late media personality have speculated that her demise was connected with complications from her sickle cell anaemia condition.

The service of songs/Night of tributes and funeral service for late Tosyn Bucknor is scheduled to take place on Wednesday and Thursday, November 28 and 29, 2018, respectively

The graduate of the University of Lagos got married to Frenchman Aurelien Boyer in a traditional ceremony in Lagos in 2015, surrounded by friends and family.

Five months later, they had their white wedding in France, Boyer’s home country.

Tosyn Bucknor started her OAP duties with Tee-A at Eko FM. She was also an intern at Cool FM where she hosted the ‘Fun Hour Show’ on Saturdays.

Bucknor joined Top Radio after her youth service in 2009 as the only female handling a morning show.

The top media personality was a rising star having been nominated for several awards including Future Awards, ELOY Awards, and Best of Nollywood.

Until her death, Tosyn Bucknor was also a vlogger, musician and motivational speaker while working as a staff of Inspiration FM where she hosted her own morning talk show.

She will be greatly missed.

See the funeral arrangements below 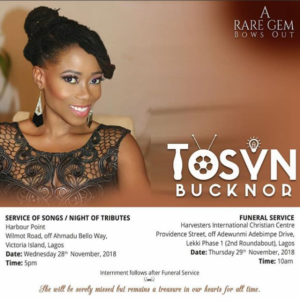 NASA jittery but confident about landing probe on Mars