Recently released activist, Deji Adeyanju who was released after spending 78 days behind bars, has stated that the many weeks he spent there has only given him “Vitamin C”, making him feel refreshed and re-energized.

He went ahead to explain that he wouldn’t give up on making the government accountable for its activities and telling the truth. Hours after his release, he flew back to Abuja where he was welcomed by a group of supporters at the Nnamdi Azikiwe International Airport. Adeyanju showered words of appreciation to them.

He said, “For me, I am convinced that when you lock up an activist in prison, what you are doing is that you are just giving him Vitamin C so that he can be refreshed. So, I have gone in, I am refreshed, I am re-energized. So, the government should prepare for four more years of activism.” 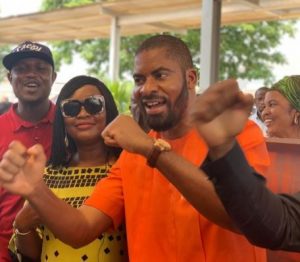 He further stated that he still did not understand why the government arrested him without any justifiable reason, adding that he even became popular in the process. Adeyanju stated that his experience has increased the level of his determination and resilience and that he won’t shy away from matching against propaganda, and injustice by the government.

Again, he mentioned that if he were to be re-arrested, he wouldn’t still stop saying the truth as that is what he considers as his specialty. The activist later affirmed that he was not being used by the main opposition.

He stated,  “If it is PDP, we will still criticize, but if they don’t want to be criticized, they should leave and go to Daura. In as much as they are on top of the seat, they should get ready for criticism,” he declared.

Also, read: Why Atiku could never have won on February 23 – Keyamo

Why Atiku could never have won on February 23 – Keyamo