MTN Nigeria has deleted an apology it offered to customers who experienced service outage in Lekki and environs in Lagos on Tuesday evening.

The telecom giant had shared the apology at 11:54 pm Nigerian Time via its Twitter customer care handle @MTN180, hours after dozens of unarmed EndSARS protesters were shot by armed men in military fatigues.

Titled “Service Challenges”, the apology read, “We are truly sorry for any difficulty you may have connecting to the network in parts of Lekki, Oniru and Victoria Island at this time.

“This is due to the loss of auxiliary power supply at a hub site in the area.

“Our engineers are working to resolve these challenges as quickly as possible, although they are constrained by the prevailing circumstances which limit access.

“Thank you for your patience.”

Although the apology has now been deleted, The Herald got a screengrab before the apology was yanked off Twitter. 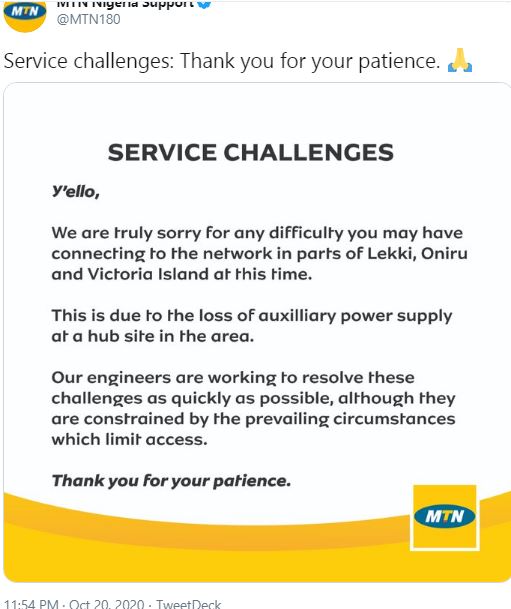 Many Nigerians lambasted the company over the apology, saying the service outage prevented many of the victims from reaching out or being reached while the Lekki Toll Gate attack lasted.

The Twitter user wrote, “I’m a telecom equipment installer. It is a lie; I have done multiple installations for MTN via Huawei nationwide.

“When the main source of power fails, the backup DC picks up and these backup DC have a depth of discharge of 70%, so a hub can be up for 6hours before it eventually goes down completely.

“Besides every hub site have two generating sets.

“These generators are services regularly. So @MTN180 should not insult us. We are heavy-hearted.

Popular musician, Davido tweeted, “I regret ever working with y’all !!!”

I regret ever working with y’all !!! https://t.co/ick7dnoMdP