Kelechi Nwigbo, from Akahufu Ekpaomaka village in the Ikwo Local Government Area of Ebonyi State, has been found dead in his hotel room. The middle-aged man, whose body was already decomposing when discovered, was said to have been killed by lightning on September 29.

It was gathered by newsmen that the deceased, who was based in Germany, had checked into a hotel which is behind a popular Eke Market, Afipko, in the Afipko North Local Government of Eboyin State on the 20th of September and instructed not to be disturbed by anyone except he demanded attention.

The incident, Southern City News gathered, allegedly occurred in a hotel behind the popular Eke Market, Afipko, in the Afipko North Local Government Area of the state on Sunday, September 29, 2019.

It was learnt that the deceased, who was said to be based in Germany, had checked into the hotel on September 20 and had dropped an instruction at the reception that nobody should disturb him.

Days after, a repulsive odour was perceived coming out of his room, the hotel management alerted the police immediately.
On the arrival of the police, the door to the room was broken down and he was found dead, carrying calabash with some money and white cloth material inside. A white cloth was also tied around his waist and on his head.

PUNCH gathered that the hotel management had heard a loud thunder strike coming from the window of his room, but could not go to check on him because of the instruction that he gave, which was that he should not be disturbed.

It was also reported by Southern City News that the family of the deceased had no knowledge of his arrival in Nigeria, neither were his friends in Germany aware. They also stated that the deceased was of the habit of not informing them of his visits to the country.

The Police Public Relations Officer in the state, Loveth Odah, has confirmed the incident to PUNCH and further said that the police were making efforts to uncover the mystery of his death.

Odah told PUNCH that his deceased’s body was already decomposing when discovered after breaking into the room.

“His passport was recovered from the room and the body evacuated to the mortuary”. 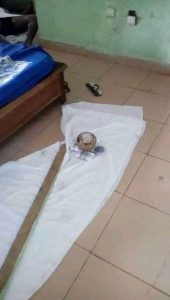 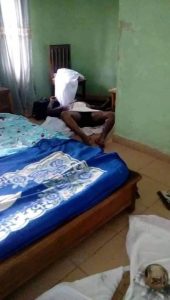 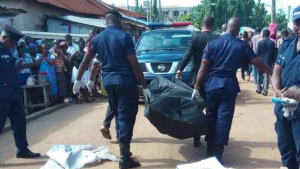 “I was happy, now see what it has cost me”- Kosisochukwu complains about failed laser treatment