Liverpool finished an invincible year as Sheffield lose back to back

Goals from Sadio Mane and Mo Salah were enough for Liverpool to see off Chris Wilder’s Sheffield United. Liverpool has now finished their unbeaten year with 37 games, 89 goals and 101 points. 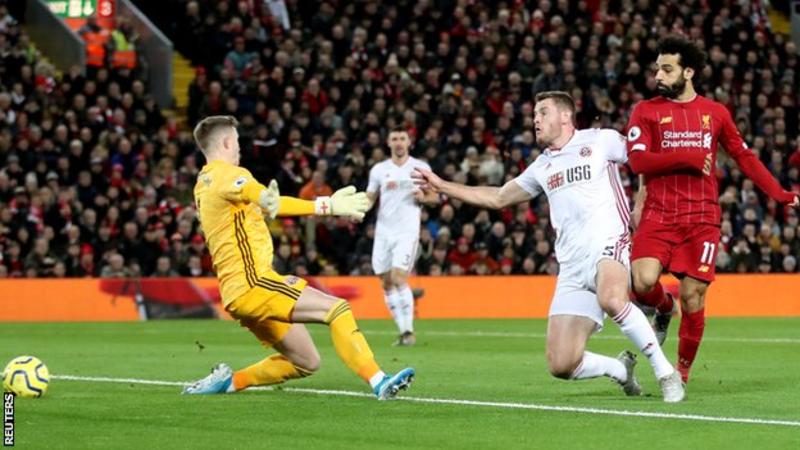 Salah gave the host the lead at the 4th minutes with a simple tap-in from Andy Robertson’s set-up. Salah then turned in an assist for Sadio Mane’s sealer.

Sheffield United were unable to get into their strides by which they’ve endeared themselves to many in their return to the Premier League since they last played at this level in 2007.

Jürgen Klopp’s men have dropped just two points from a possible 60 this season.

They still have a long way to achieve an invincible season like the Arsenal of 2003-04 but the possibility of that happening will only get clearer with each win.

Firmino should have gotten a goal in the match but his curler just went past the post. The Brazilian hasn’t scored at home since march. Mo Salah had two more chances to score but was unlucky. His chip shot beat everyone but for the inside of the crossbar.

Sheffield United put one in the net but only long after the offside flag had gone up. They also had an effort that was well saved after the  Salah goal.

“It’s obviously good [to go unbeaten for a year] but the target was not to extend this [run], but to win the game. The best thing you can say when you play against Sheffield United is to keep the game not spectacular. We controlled the game.

“We played around their formation, played behind, in-between, broke the lines and had counter-attacks. All the things we want to have. The boys played sensational.

“You saw these glimpses in the game where we were a bit sloppy. They wanted two or three situations in which they could score in. We needed that concentration and that was incredibly tough but the boys did so well. Nothing ends. We have to make sure we are ready again.

“I am really happy and really proud of the boys. We should not take things like this for granted. The way we controlled Sheffield United was exceptional. In possession we were incredible, we were calm but lively as well. The goals we scored were exceptional.”

Chris Wilder was disappointed at his men’s showing on the night;

“Little bit drained – disappointed in our performance tonight, we never laid a glove on them. If there’s ever an example of a team doing well and with the desire, that’s Liverpool.

“The first balls, second balls, running forward, tackling, defending, being aggressive; they [Liverpool] showed all those qualities. It’s a great example for our team. We were off the pace. Maybe the Manchester City game took more out of them than I expected – our goalkeeper kept us in the game. For us to get anything, we would have had to perform really well and we didn’t.

“Every time we tried to press they played around us with the quality they have got. All the stuff that gets talked about in academies, with young coaches – just look at what they did in terms of the basic stuff that gives you an opportunity to play and dominate. That’s what they did to us. Not only technically, but tactically, they are a fantastic side. We have been well beaten.

“People talk about us having afternoons and nights like this when we came to the Premier League. We have not had that done to us all season until now so that’s a small comfort. But it still hurts, we are still professionals. I believe if we played near our best we could have got something but we weren’t anywhere near it.”

Liverpool retain their 13 point lead over Leicester to rain firmly at the top of the pile while Sheffield United drop to 8th on the log.