Luis Suarez is once again in the headlines for his controversial dive after Uruguay beat Peru 2-1 in a World Cup Qualifier on Friday.

Peru coach Sergio Markarian criticised the referee Patricio Loustau for sending off Victor Yotun for a clash with Suarez in the first half.

The Uruguayan’s simulated fall led to the sending off of Yotun.

Marakarian told reporters: “I’ll do my best to make sure this referee does not go to the World Cup because I’m not ashamed to say it was totally decisive.

“What Yotun did was silly but I’ve seen worse, like elbows or persistent simulation that goes unpunished.”

Suarez earned his side a penalty earlier in the game – from which he scored- when he was challenged by Peruvian defender Christian Ramos, though, replays showed there was minimal contact.

Peru is now five points behind Uruguay, who occupy the fifth-place play-off position in the Conmebol qualifying pool. 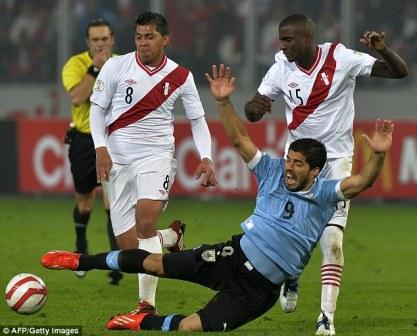