A young man has opened a gofundme account to raise funds for his kidnapped Mother and Aunt who came to Nigeria for the burial of his grandfather.

Pastor Omobola Adepoju and Mrs Abiola Olukotun came back to Nigeria from the United States for the funeral of their father and were kidnapped in Ibadan.

The women, both daughters of late Chief Emiola Adesina, a former Director of Sports for the old Western region were kidnapped after the burial of their late father on Monday.

According to reports from various newspapers, both women were kidnapped from a farm in Badeku, Ibadan, Oyo State.

The kidnappers demanded for N100 million for the release of the women while the Police say they are doing all they can to secure their release.

However, a young man on twitter @_Daminator has come out to appeal for donations towards raising the ransom demanded by the kidnappers.

The young man who says the women are his mother and aunt, revealed how they were Kidnapped.

According to him, the kidnappers shot out the tires of their vehicle before taking them hostage. 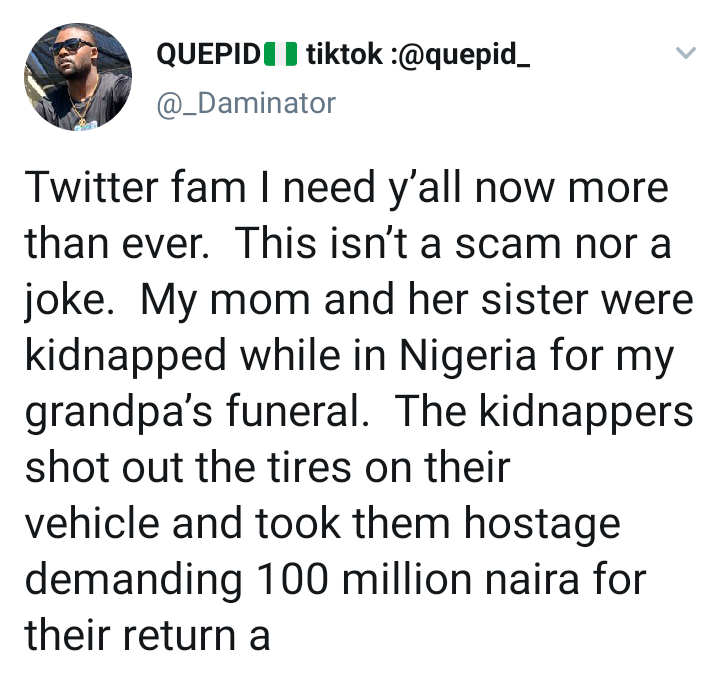 He said although the police are doing all they can, the family is taking every step necessary to secure their release hence the creation of the gofundme account.

Speaking on the kidnapp, a family source said further that the victims came from Atlanta in the United States.

According to the source;

“Omobola came in from Atlanta and was with her sister in her farm at a location on Ife Road in Ibadan where they were both kidnapped yesterday (Monday). The kidnappers have called the family to demand N100million.”

Another source which happens to be the husband to one of the kidnapp victims, Kitolu Olukotun gave a more vivid account;

“My wife and sister-in-law went to the farm in the afternoon on Monday. Suddenly, the kidnappers emerged from the bush. According to one of my boys on the farm, they were six in number.

“Three of them are Fulani while the remaining three are Yoruba. One of them was carrying an AK 47 rifle with which they shot sporadically in the air. They shot at the tyre of the vehicle and also fired a shot at the driver of our customers.

“They ransacked the vehicle probably looking for something. After that, they marched my wife and the sister-in-law through the bush path. When they called me, they demanded N100 million.

But, I told them I don’t have such money; I told them to accept N1million but they disagreed saying, where? They then refused to speak with me.

They have been threatening my wife. They insisted they would not take anything less than N20m.” 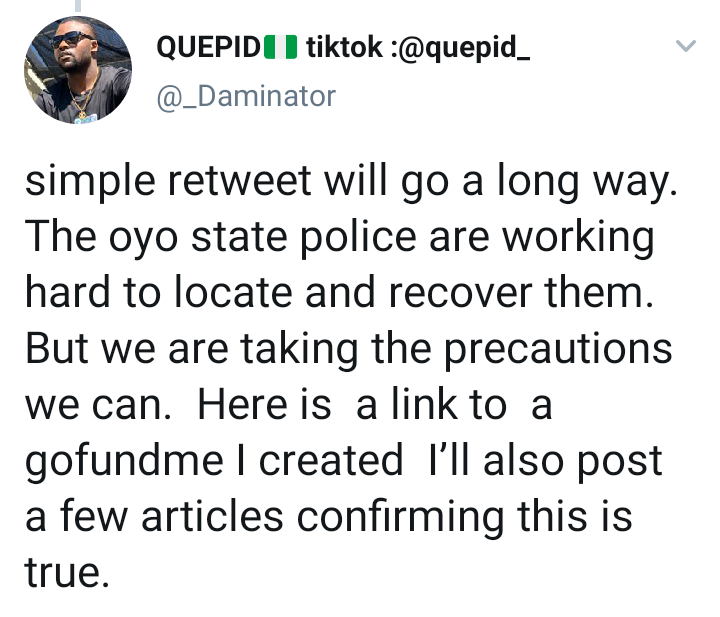 We posted all NYSC members before closing camps– Director