A man is currently being held by authorities after he tried to force himself into the Buckingham Palace.
According to reports, the 22-year-old successfully scaled through the fence of the place and was within meters from where Queen Elizabeth was sleeping.
He then began to knock heavily on doors of the palace in the bid to gain entry but thankfully, doors leading to the queen’s room were usually locked during the early hours of the day.
As a result, he was caught by security guards on duty at the time. 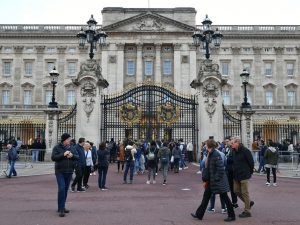 Speaking to newsmen on the incident, an insider said, “This intruder got into the Palace almost 37 years to the day since Michael Fagan ended up getting inside the Queen’s bedroom.
“There is a genuine theory and very real fear that he could have been launching a copycat operation.
“How is it possible all these years later that someone can climb the fence and get right inside the grounds without being stopped immediately?
“What about heat censors and CCTV? The Queen’s safety should be paramount.”
The young man was not found with any physical weapon and has merely been charged with trespassing after initial investigations on the matter.