Joe Chinakwe, the man who was arrested for calling his dog Buhari with the explanation that he was inciting potential violence, has named his daughter Aisha.

This is presumably after the President’s wife and this particular name should be viewed as less offensive as it was given to a human being.

This was reported by a Lawyer/Human Rights Activist, Inibehe Effiong on his Twitter page. Effiong was also involved in the initial case against Chinakwe who was reported to the police by his Northern neighbour who was offended by the name given to his dog.

Chinakwe was eventually released on bail in a case that has captured the imagination of the nation and made them ask certain questions.

Chinakwe did reveal that he had two other dogs named Obama and Joe.

You can see Effiong’s tweets below. 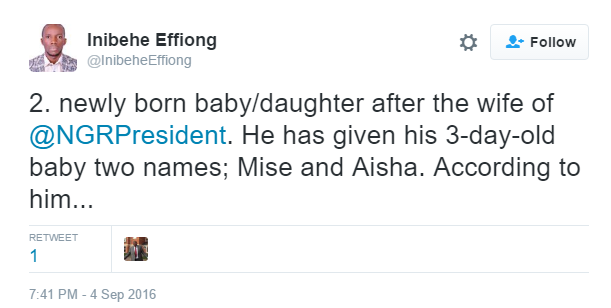 My Mother Was Kidnapped Because Of PDP

The Worst APC Governor Is Better Than the Best PDP Governor- Sen. Goje