Man douses son with kerosene, sets him on fire over N500

A 35-year-old man, Idoreyin Essien is currently in police custody following the death of his son whom he set on fire in Akwa Ibom.

According to reports, Essien who lived in Afia Nsit area Eket Local Government in the state, had on Friday, August 30, bathed his own son with Kerosene and lit him up as a punishment for stealing N500 from their neighbor.

A community leader, Mr. Effiong Okon who explained how the incidence went down to newsmen, revealed that the young boy had taken the money to buy himself food but their neighbor, however, reported the incidence to Essien when he returned home.

He then went ahead to assault the young boy and sent him to buy the kerosene which he later used to start the fire. 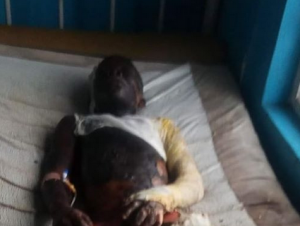 Okon said, “The boy stole N500 from one of the neighbors to buy food and when his father discovered, he quickly paid the money and later sent the boy to buy kerosene.

“The son innocently ran to buy the kerosene that the father used to burn him. Essien tied the boy with a rope and poured the kerosene on him, set him ablaze and watched him burn.”

Although the boy was quickly rushed to the hospital after other neighbor intervened, he eventually gave up the ghost.

In his reaction, Akwa Ibom’s Police Spokesperson, Odiko Macdon iterated that once investigations into the matter have been concluded, he would ensure that the suspect is charged to court.

Xenophobia: “You Are Retarded” – Burna Boy Slams AKA

EEDC promise to improve supply of power in Imo State